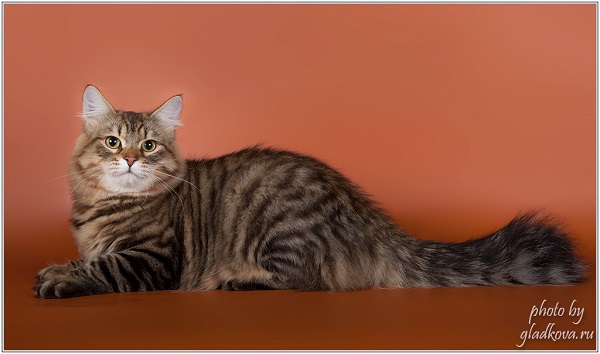 Deciding to have a pet, my family and I, began to study the characteristics of different breeds of cats. Paramount for us was: temperament, manners, care, health, and the similarity of the external appearance and character with the former favourite. By reading and studying the breed, our choice fell unambiguously on traditional Siberian, so reminiscent of the departed cat. So in our house there was the first traditional thoroughbred Siberian cat "Evelina Slavicat".

Having got acquainted closer with the new member of the family, we began to discover new facets of the animal. Calm balanced temper, wildness in the presence of strangers was absent, proudly raised his head and look "Queen". Evelina has excellent health, inherent in the mother nature. Strong, muscular, harmonious physique. It is sufficient fluffy, but the fur doesn't fly around the room, does not require painstaking daily care. The favorite is graceful and playful, loves communication and children, but not annoying: has an intellectual mind and an excellent individual character of a devoted unobtrusive friend, the girl is independent, but appreciates affection and attention. She's so similar and not similar to the creation from childhood! Later, carried away by breeding purebred cats, we began to understand what the selection, what a Titanic work done breeders involved in the birth of the animal. 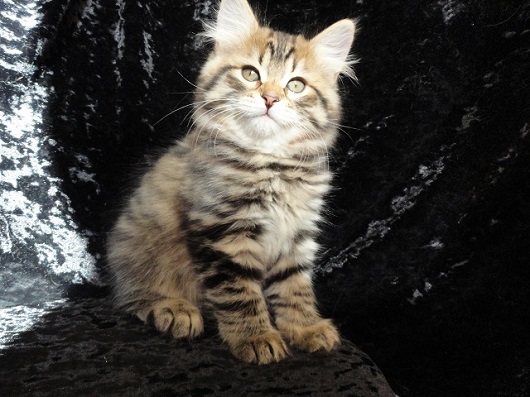 In the future, doing felinologii came to light «Vlasta Line Kvin». From the first weeks of Quinn's life, my heart screamed, "here it is: miracle, doll, luck." My darling boy. So much work, waiting. Joy has captured the mind and spirit. Wanting to adopt Quinn rife, and hands do not give, heart breaks. Once at his first exhibition, Quinn lived up to all expectations, dispelled the last doubts. At the exhibition, the boy bloomed. He was not confused by someone else's unusual situation, a lot of strangers, noise, vanity happening around. In the ring he proudly held his head, danced fingering front paws performing "Spanish steps". The breed data of the boy were highly appreciated by experts. High places and victories in rings, nominations in the competition. After the exhibition, the final decision was made, "Vlasta Line Kvin" remains in the nursery! Taking further part in various exhibitions, he only proved his high breed data and temperament.

Traditional Siberians without Siamese gene develop for a long time as a quality natural wine, the longer the exposure, the more interesting, richer becomes the taste, as well as the animal. Full dawn of the Siberian reaches to four years. The shape of the head becomes more filled, muscle mass is added, the backbone becomes heavier. The right wool does not form tangles. The animal is not afraid of drafts and cold, dense undercoat protects against any weather surprises. Large, rapid in a throw with a big shock weight, with slow measured movements at rest and long waiting periods before attack. Their movements are full of Majesty and powerful force.

For them the natural wild color of cats, one that allows them to camouflage in the conditions of permanent residence. For Siberians representing native breed-a combination of black, gray, brown and red. Any amount of white is allowed. Eyes slightly oval, for example, any shade from yellow to green, blue colors and white van. Medium length coat that consists of dense underfur and coarse guard coat hair. Water-repellent. Invalid paklausti and periaswamy undercoat. Very beneficial for hair affected by fresh air and proper nutrition. The length of the cover hair and undercoat depends on the season. Siberian cat is one of the largest breeds in the world.

Choosing a family pet, preferring the Siberian cat is a traditional color, you get a soulmate, a child, the pride of Russia.