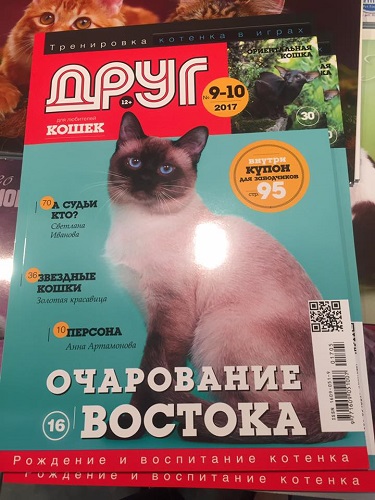 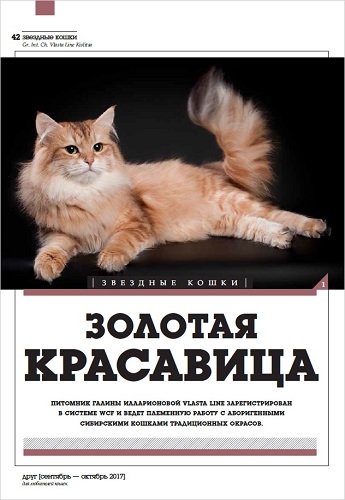 A SPECIAL PRIDE OF THE BREEDER — CAT GOLDEN COLOR Gr. Int. Ch. Vlasta Line Kislitsa (home just sour) who was born in the nursery and fully justified its hopes, repeatedly confirming their victories at exhibitions high breed data. No less important, that and their children this Siberian Angelin it conveys its best qualities: they successfully and actively participate in exhibitions, receiving high titles and awards.
the owner of the kennel with pleasure and love tells about its " star», and perhaps its recommendations for the future owners will not only help to buy purebred kitten, but also to implement dream - "light" on felinological the sky is a new "star".

— Galina, your Cattery deals with Siberian cats. Than due to the choice of this Breed? And why Siberians traditional colors?

— The choice of breed I've tried to be very judicious, on the basis from their demands as well as family members.
Wanted to have a pet with independent character, unobtrusive, but not a couch potato, healthy that do not require daily grooming. After studying the set information for a long time time the choice fell on the Siberian. Color was defined even before choice breed: like an animal with natural beauty that it is associated with nature itself. So in our house there was the first traditional Siberian cat Evelina Slavicat. 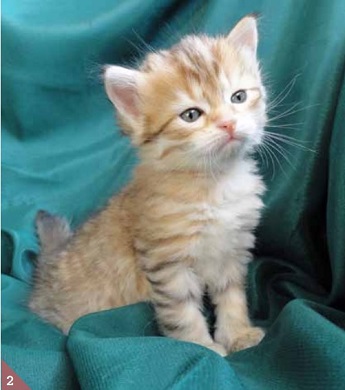 — You had cats to Siberians?

— Since childhood in my house lived regular non-pedigreed cats, the last was found on the ground floor in a box. about three weeks old. Girl lived for about 10 years, after her departure for two years, we could not decide to have a new pet. She looked like a Siberian cat, though I never carried her. its to Siberian breed, always laughed at me and said she was from the entrance. Exactly Christina influenced the choice of breed.
With the advent of the Evelyn house we have become discover new facets of the Siberian breeds. The quiet steady demeanour, the lack of savagery in relation to strangers, is proud of the lifted head and glance queens. Evelina's strong, muscular. body and excellent health. It is enough fluffy, but the fur doesn't fly around the room. Our favorite is graceful and playful, loves communication and children, but not annoying, has high intelligence and excellent character: girl independent, but loves affection and attention. She's so similar and not like Christina! After comparing pedigreed and ordinary cats are my heart conquered by purebred cats.

— When and why did the decision to register nursery?

— The decision to register a cattery it came after the realization that I want to breed Siberian breed seriously. This was preceded by the study breeds, pedigrees, visiting felinological seminars and courses, not equally- multiple participation in exhibitions. After the birth of the first litter was filed document- you for registration of the cattery.
In December 2014, the Vlasta Line cattery was registered under the WCF system. From this the moment each kitten that is born we have, has the prefix of the kennel.

— In exhibitions any systems are you involved? Would you like To try your hand at the exhibitions of the different associations? As you consider, the breeder necessarily need to present your Pets?

— Animals of the cattery take part in exhibitions under the WCF system. Into the plan a great desire to try others systems of greatest interest TICA and FIFe.
My opinion — definitely a breeder must take part in exhibitions, demonstrating their achievements in the breed. The exhibition is not only an expert's assessment It gives you the opportunity to look at others specimens to perform advantages and disadvantages of their animals, to find a partner, to communicate with breeders. Breed data of their cats factory- chick can only confirm by taking participation in rings and shows, as well as in the examination. Animal that has not passed the examination at the exhibition, can not have the status of "show". Any breeder loves his Pets. Who, if not he, will show, tell, to popularize the breed, after all the only possibility for most people get to know different breeds cats-is to visit the exhibition. 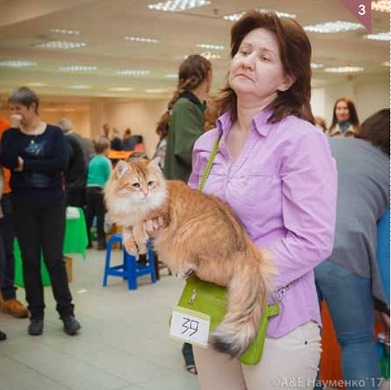 — Let's talk about your "star" - cat Gr. Int. Ch. Vlasta Line Kislitsa. She was born in your Kennel? You immediately understood her prospects and decided to leave manufacturer in the kennel?

— This is a cat of my breeding. Desire to leave the girl from these parents was even when choosing a pair. Sour me immediately I liked it, but the final decision I took it when she was two months old.

— Justified whether this cat your the expectations of both the manufacturer?

— At the age of 1.2, she became a mother. Her children actively participate in exhibitions, get the highest places, and become winners in the rings and shows. in January was born grandson of-rising "star" kennel.
did it Meet my expectations? Repeatedly!

— What character from a "star"? She gets along with others — other Pets, your home, guests? How does himself in the road, at exhibitions?

— The cat is self-sufficient, knows her worth, although the show just like yourself not her character. With a mind as gentle as a cloud, but it has an iron rod. It cannot be reversed by force, can only persuade. By nature not a leader, but at the same time will not allow itself to offense. Loyal to other Pets. I'll be glad to greets guests, if the opportunity arises, talk to the eyelet of your cat lives. Grooming hair masters-its seahorse.
Riding in the car Oxalis is not particularly loves, but endures. At exhibitions quiet and curious, there is no hint aggression. 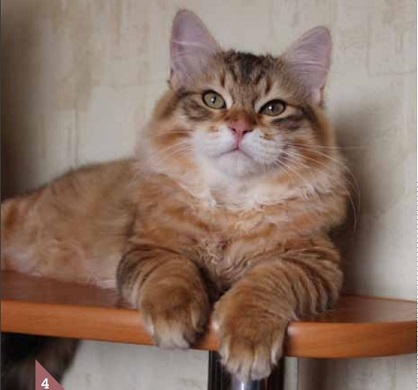 — At what age did you exhibit the cat in the first place? What kind of exhibition was it? Than she remembered?

— At the age of 3.3 months on the anniversary the exhibition "Siberian miracle 2014". Oxalis she was the youngest member. For you- bet came a lot of Siberians from different corners of Russia and abroad. Competition was a huge — 96 Siberians. I'm sure., she was worried about her young age, but the girl behaved perfectly. She got great description, both days was nominated for Best. Won the title of BEST Female traditional color BREEDERS CHOICE.

— List the highest achievements and the brightest victories your star.» What a victory for you especially the road and why?

— No show for Oxalis was not without rewards and confirm its high breed data. Repeatedly, she became BOS, Best Female SS, SS Best Breed, and also received high prizes in the WCF-ring. The most striking and expensive victory for me is the title of the BEST Female traditional color BREEDERS CHOICE.
To finish his career, the Sorrel is not going, although now she is preparing again to become a mother, because the feminine has not been canceled.

— Can you remember any funny, unusual cases that have occurred with you and your " star» at shows? Please tell about the most interesting event.

— Once during a photo shoot at an exhibition at the photographer Naumenko Kislitsa began to look closely at the table, standing nearby. Suddenly came the idea is to try to give her the opportunity jump on it and capture the moment. Set a table near, and Kislitsa without any hesitation repeatedly jumped him. Later when talking with the photographer revealed that this is the first an animal in his practice that was photographed in flight.

— Your plans for the near future the future?

— I plan to take out the grandson of Kislitsa his first exhibition. I hope the little one will be highly appreciated by the experts of vision- tivah we can talk after the show.

— Your wishes to readers magazine, dreaming to buy a pet that is guaranteed become a star?

— It is necessary to understand that it is necessary constantly visit exhibitions, participate in breeding work kennel, bear moral and material burden. Therefore before you dream of a star, ask yourself question: are you ready for this? Important to know and what one hundred percent guarantee that even the most promising kitten will become a star, no. Yes and breeder hardly you such a entrusts. This is the result of his work, to which he could strive for a long time time. My wish to the person who decided he was ready for such a responsible step: be as Frank as possible with the breeder, initially designate your goals and wishes, because the breeder must to trust you. 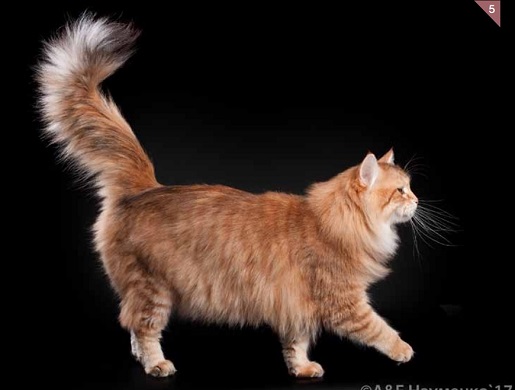